This page recognizes some of the many League of Women Voters members, past and present.

​This article was adapted from LWVCC VOTER newsletter April 2021.  ​Author's note:  This article uses a word twice that readers may find offensive. It appears in a  quotation describing a personal  experience. 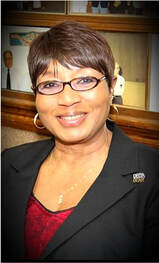 League member Minnie Pearson was 17 when she left Mississippi to travel north to Champaign.  Soon after she arrived an incident stimulated her lifelong commitment to the NAACP, and she has served as the president of the local chapter for the past six years.

“When I left Mississippi, I was naïve and under the impression I was coming to the north where I would be free to pursue any opportunity to better myself.  I soon learned, however, there were the same limitations for a black woman in Champaign as in Mississippi,” Pearson said.   What brought this to reality was when Minnie walked into a restaurant in Champaign and was told to “Get your nigger ass out of here.” It shocked her.  She left the restaurant, ran to the nearest phone booth and called her father.  She told him, “I have been called a nigger three times this week and I’m not going to let that happen too many more times without speaking out.”

Her dad asked her, “Have you reached out to the NAACP?”  He was a member of the NAACP in the late 50s and 60s in Mississippi, but kept it secret for fear it could jeopardize his job.   Talking with her dad calmed Minnie and eventually she joined the Champaign NAACP.

“When I did get involved with the Champaign County NAACP people were very helpful in giving advice about things that were bothering me,” Pearson said. “Going to the meetings gave me a platform to hear what was happening with other people and their point of view and I could share.  It helped me feel like I could stand up for myself because I heard so many stories and how they responded. “

“The NAACP is necessary because it is for the advancement of colored people.  It directs you, educates you and helps you realize where your power comes from.  They helped me by pointing out that we are all human and deserve respect and dignity.  They put me in touch with other members who could also help me,” she said.

The NAACP was organized in 1908 to support political, educational, social, and economic equality and to eliminate race prejudice and remove racial barriers.  These goals endure.

“Today our goal is to invite and appreciate diversity,” Pearson said.  “Few people know that white women were instrumental in starting the NAACP in 1908.  They recognized injustices to people of color and did a lot of the legwork.  I am very pleased that we have more than 50 white members, many of whom have become life members, out of a total membership approaching 200.

“Sometimes young people of color think the NAACP is no longer relevant.  But it’s just as relevant today as it was in 1908.  My message to them is--it’s wonderful to get out and peacefully protest but a really smart thing to do is to work with your local government, your police, your mayor. That’s how you get laws changed--by coming to the table and working out your differences.  Work with people to change what’s wrong.
That is why we are spending a lot of time now working on the Use of Force policy with our local police department.

“There are some good people in this town who are willing to work to make this place safe for all of us.” 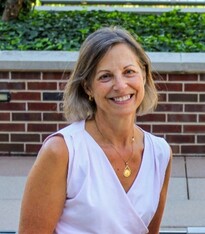 Barbara Houseworth was a member of LWVCC in the 1960s and it was this role that inspired her daughter, Susan Houseworth, to pursue membership in LWVCC.  “I had been searching for a way to do something to mitigate my frustration with the current political climate.  After the events of January 6, 2021, I began searching in earnest for something to do. I hope I can make a contribution in some way,” Susan Houseworth commented.

Retired from the University of Illinois in 2018 as a research coordinator for the Exercise Psychology Lab, Susan worked on projects related to the effects of physical activity on cognitive functioning, especially on older populations. As many of us, she is hoping that her passion for travel and learning about the world will be renewed soon. She has two grown children and two grandchildren she hopes to visit as well as exploring far-off places. Her interests extend to outdoor activities, including canoeing, and she recently began competing in sprint triathlons and 5-10K races.
Source: May 2021 Voter

Louise H. Allen, 95, died Tuesday (July 28, 2020) in Champaign.  Louise was a member of the League of Women Voters of Champaign County for over 50 years. She served on the board of the Illinois League and was a member of various national league committees. In addition to her career in educational administration, Louise's work in the community was extensive.  Her service included trusteeship of both the Champaign-Urbana Mass Transit District and the Champaign Public Library. She served each of those institutions as vice president and chair of the Personnel Committee, and played a supervisory role in the planning and construction of the Illinois Terminal in Champaign and the current Champaign Public Library building. She also served on the board of Blackburn College, where she chaired the Academic Services Committee.

Louise  was a member of the Women’s Legacy Circle, the Auxiliary, and the Margaret Carle Society of the Carle Hospital Foundation in Urbana. She was a member of the board of the Alzheimer's Association’s Champaign chapter, for which she facilitated informational meetings and support groups for the families and caretakers of Alzheimer's victims. She was also active in UIUC's OLLI, the Urbana Rotary, Krannert programs and more.

In light of the restrictions on travel and gatherings currently imposed to reduce the spread of the coronavirus, there will be no memorial service. In lieu of flowers, please consider donating to the League of Women Voters, the University of Illinois Foundation or the Alzheimer's Association.